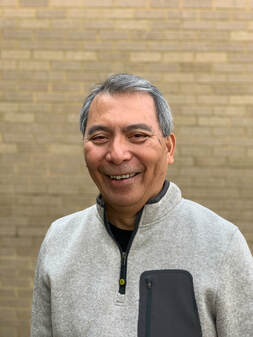 Elvin manages a group of patent examiners at the USPTO.  His prior work experience has been with the DOD (Department of Defense) as a navy contractor for over 10 years.

He has earned a Bachelor of Science degree in Electrical and Computer Engineering at the University of California in Davis,
which is considered one of the nation's top public research universities.

Back in April 1989, Elvin found Jesus through the life testimony of his mother, Perfecta and brother, Steve.

He is blessed with a loving wife, Maria (whom most call Bebutte), and three wonderful children named Gerard, Therese, and Jonah. Elvin enjoys his leisure time doing what he does best, playing golf and spending time with loved ones.

As the Evangelism Director, it is his vision and goal to increase the church's awareness and involvement in local and foreign missions. He stands by the verse in Ecclessiastes 11:1-2,  "Ship your grain across the sea; after many days you may receive a return. Invest in seven ventures, yes, in eight; you do not know what disaster may come upon the land."