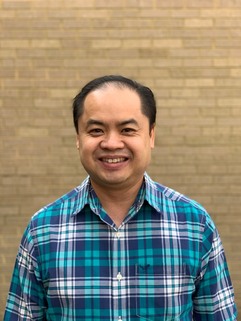 He finished his Bachelor of Science in Nursing, at University of Pangasinan in Philippines in 1992.

Within those times that he was working in Saudi Arabia to where it is popularly known as a Muslim country, his housemate Dennis who is a Christian always invited friends to do bible study, praise and worship practice, and even a worship service in his place to which it was all done in a complete private manner. They were not allowed to practice any other religion except the Muslim Religion but Arnel has seen them faithfully praising Christ no matter what. Rino Alcantara and Dennis Junio (who are now both  based in Day-By-Day Church in New Jersey) are the very significant people in his life who helped him know Christ in a deeper aspect. They were the ones who strongly and consistently encouraged Arnel to join Day-By-Day Church. Arnel was skeptical at first, but as he heard the word of God everyday through them, he submitted himself and finally accepted the Lord as his Savior with the conviction of the Holy Spirit in 1997. Arnel has been faithfully serving the Lord since then and joined Fil-Am Community Church when his whole family moved here in the United States in 2004.

To this day, Arnel is very grateful and is happily married to Rosie “Tootsie” Santos. They got married on May 25, 1998 with a civil wedding, and followed by a church wedding on the 28th of November the same year. They are blessed with a son, Joshua Philip Santos, who was born August 25, 1999.  His wife and his son are his greatest inspirations in life for they lovingly support him with his ministry in serving the Lord and Fil-Am Community Church.

His personal philosophy in life is focusing on the importance of family. He believes that as parents, we are accountable of raising empowered, happy, and God-fearing children and we can make them the way we want them to be by creating an environment of a healthy marriage. He believes a happy family creates a healthy community. A healthy community builds strong relationships in love, peace, and abundant life. And finally, strong relationships founded by the most powerful teacher in life which is love will connect us to someone bigger than ourselves – GOD.

As the Director of the Fellowship Ministry, his vision to this ministry is to bring people to Christ and make them feel a sense of belonging in our church in order to retain their love on fire of serving the Lord. And that through the Fellowship Ministry, he will serve as a channel to direct fellow believers to the right path of life and to the next step of their existence.

Arnel is not a very athletic minded person, but he finds joy in playing badminton and table tennis. He spends his free time surfing but learning on the computer. Watching movies is his romantic pastime with his family during his day-off from work. And when winter comes, skiing with friends is the most addicting family time they do. Balancing life between work, family, friends, loved ones, and God is essential to living life to the fullest.